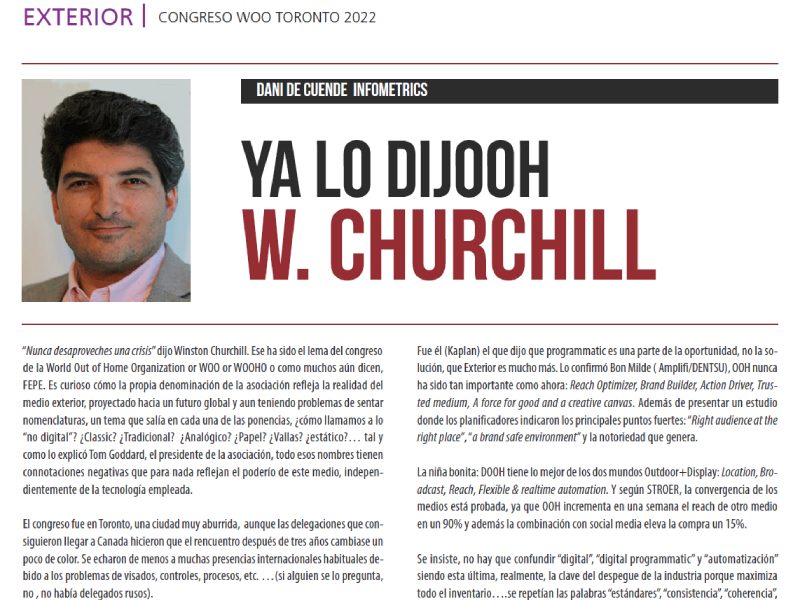 In issue 468 of July 2022 of the magazine The Advertiser publishes Daniel Cuende's chronicle of the recent WOO (World Out-Of-Home Organization) Congress held in Toronto from May 27-29, 2020, which we reproduce below:

Never waste a crisis" said Winston Churchill. That has been the motto of the congress of the World Out of Home Organization or WOO or WOOHO or as many still say, FEPE. It is curious how the very name of the association reflects the reality of the outdoor media, projected towards a global future and even having problems of nomenclature, a topic that came up in each of the presentations, what do we call "non-digital"? Classic? Traditional? Analogical? Paper? Fences? Static?... as explained by Tom Goddard, the president of the association, all these names have negative connotations that in no way reflect the power of this medium, regardless of the technology used.

The congress was in Toronto, a very boring city, although the delegations that managed to arrive in Canada made the reunion after three years change color a little. Many of the usual international presences were missed due to the problems of visas, controls, processes, etc. ... (if anyone wonders, no, there were no Russian delegates).

Content? Yes, good, fresh, original. We have everything, ma'am. The importance of programmatic was very much relativized thanks to great presentations, where one of the European leaders stands out: STROER, which has always been the most advanced in the digital world with a clear strategy for more than 10 years. He explained his journey back and forth to the programmatic world ("it is over-engineered and over-complicated"). All that glitters is not gold and there are a lot of problems with confusing technology with business strategy. Just because it is the goose that lays the golden eggs in one industry does not mean that it can be transferred to another... in fact it may even be counterproductive in the long run. And yes, yes it is mentioned all the time that 5% of inventory produces a much higher percentage of revenue, but just that is part of the siren song. Tom Goddard himself said that the very rapid growth of digital is confusing the industry as it doesn't scale in the same way. There were constant allusions to this theme.

It is striking the caution with which the big CEOs of the companies have adopted this position compared to the madness of recent congresses that seemed that "programmatic" was going to make us all millionaires and was the solution for everything. One of the best moments of the convention was a "one-on-one" interview with Jeremy Male, CEO of Outfront, who interviewed Keith Kaplan, CEO of Kinetic, where he showed the path that the company is adopting, abandoning the concept of independent and exclusive "specialist" of the medium to become "OoH experts" and integrate again in multimedia planning, more necessary than ever. Also as an essential concept: "We don't buy billboards, we activate campaigns".

It was he (Kaplan) who said that programmatic is a part of the opportunity, not the solution, which Exterior is much more. Bon Milde (Amplifi/DENTSU) confirmed that OOH has never been as important as it is now: Reach Optimizer, Brand Builder, Action Driver, Trusted medium, A force for good and a creative canvas. In addition to presenting a study where planners indicated the main strengths: "Right audience at the right place","a brand safe environment" and the notoriety it generates.

The pretty girl: DOOH has the best of both worlds Outdoor+Display: Location, Broadcast, Reach, Flexible & realtime automation. And according to STROER, media convergence is proven, as OOH increases the reach of other media by 90% in one week and the combination with social media increases the purchase by 15%.

It is insisted, do not confuse "digital", "digital programmatic" and "automation" being the latter, really, the key to the takeoff of the industry because it maximizes the entire inventory.... were repeated the words "standards", "consistency", "coherence", "interconnection" and other terms that make life easier for all buyers (even sellers!). Speaking of terms, there is a proposal to not talk about "Digital" but "Public Video" to mark those differences versus "on-line".

Regarding research, the new "Guidelines" for OoH audience measurement were presented, a revision of the previous ones made together with ESOMAR, with the collaboration of national associations and major players from both sides of the table. Above all, it focuses on the fact that measurement must incorporate digital factors (something we have been doing in Spain since Geomex 3.0) and also clarifies what audience measurement is versus other approaches, what the principles are and not to be confused with the multitude of ad-hoc measurements that are appearing, all of them valid but with very different purposes. Neutrality, robustness and transparency are essential factors for any currency. The guidelines also point out that to facilitate cross-media it is vital to have a clear and consistent terminology (everyone uses terms such as "impacts" and the shocking thing is that they all refer to different concepts!) a compatible comparison(apples to apples). On this point, the Word Federation of Advertisers (WFA) has Global Framework definitions that should be used as the Bible in this market.

Talking about other types of new measurements, as a speaker said, it is like sex in adolescence, everyone talks about it, but few practice it and those who do, do it badly. Indeed, at first glance it seems that everything can be done but the reality, the limitations, the scalability, the legality ends up clashing in many countries.

Regarding the exit of the pandemic, the points to highlight are above all the user fatigue of the screens, which gives a great opportunity to OoH, the change of the customer journey - previously decided by the brands and now led by the consumer himself, the incipient relevance of advertising within eSports and who is the one who has to take the cat out of the water of that promising advertising budget and obviously, privacy and the impact it will have on all media.

Sustainability (and associated reputation), the new big challenge. The contrasts that an international conference has are clearly seen in these aspects, in the first world companies are seeing that sustainability requirements are increasingly necessary. Advertisers do not want to be linked to any "dirty" media and are starting to ask for more investments and controls in that area. I could not take a picture of the face of the delegates from some African countries, where their problem is that they get their billboards stolen to sell iron.... As if to ask them for a carbon footprint certificate. Another line that has been opened is the guarantees of diversity and inclusion in the exclusivists, where a manual of processes and recommendations is being prepared for companies to adopt.

For patriotic pride, congratulations to Clear Channel Spain who was a finalist for the OOH Innovation Award for their CUPRA campaign although they ended up winning the new largest digital screen in China... only 500,000 people pass by it every day!!!

A common element in most of the presentations is the absolute synergy between OoH and social networks, highlighting all kinds of integrations with Elon Musk's little bird. A lot of "Earned media" when you get the creative right. Great expectations, by the way, with a campaign that will be organized in collaboration WOO and United Nations globally.

Another high point in the congress was in the panel on programmatic, where Broadsign and Hivestack (DSP) proposed that it was better that there was only one integrated platform DSP + SSP as it happened in Uber, AirBnB or the stock exchange itself.... and the forceful response of VIOOH saying that "you could not serve two masters atthe same time", and the DSPs replying that it was also not congruent that an exclusivist (JCD) was a shareholder of an SSP that claims to be open to other operators, and with the grace that characterizes JC Conti, CEO of VIOOH, replied "I am the living proof!"and won the laughter and sympathy of the audience. Other topics discussed but also unresolved at the table were whether platforms should be OoH or Omni-channel specialists and whether outdoor companies have missed the opportunity to create an SSP of their own. What was clear was the need to standardize and, above all, to train both OoH companies and advertisers so that they know what can be done.

Once it was clear that traffic is recovering in the cities, for the end, the sweetest part: a presentation by Dino Burbidge Innovation leader of SkyLabs where he approached us to the future and pointed out the trends that will impact OoH the most: Real time modeling of synthetic universes, Online regulation that will drag OoH, QR codes in motion or generated by thousands of drones in the air, ethical supply chain, real time rendering instead of using recorded video, e-ink cars that will become advertising media when parked, on-demand creative generation with AI, the exclusivity of virtual worlds, mobile/autonomous street furniture, flexible LEDs that make all clothing a new advertising world, the tokenization of payments, and obviously augmented reality.....

All those innovations with demonstrations and real examples that made the audience excited to be in the best sector and at the best time, after the hard time we have had, the OoH improving, growing and innovating strong, very strong and with the pandemic .... we have learned that you should never waste a good crisis.

>We use our own and third party cookies to analyse our services. Click HERE for full information about our cookie policy.
You can get more information and configure your preferences by clicking on settings.

This site uses cookies so that we can provide you with the best possible user experience. The information in the cookies is stored in your browser and performs functions such as recognizing you when you return to our site or helping our team understand what sections of the site you find most interesting and useful.

If you disable this cookie we will not be able to save your preferences. This means that every time you visit this website you will have to enable or disable cookies again.

Please activate the strictly necessary cookies first so that we can save your preferences!